A history of James Peacock

James Peacock was born around 1585, he was one of three children.  At the age of fourteen he was apprenticed to Thomas Smith a Master Skinner in London.  James became a very successful business man but when he died in 1641 he had no children to leave is fortune to.

In his will James left money to help the sick and poor. He also left a farmhouse in Ruddington to be used as a school and house for the school master. He named twelve men to be trustees lead by Richard Hardmett, in time the farmhouse was moved to Town Street (now Church Street).  In 1875 a new school (picture below) was built on the corner of Asher Lane and The Green with a house for the master. 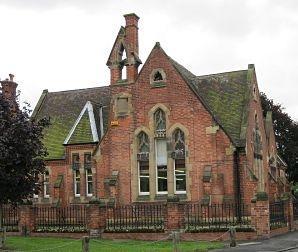 James Peacock intended the school to be for all children,  unusually for the time, boys and girls attended the free school.  Money for the school initially came from plots of land in Ruddington which were rented out to farmers but eventually the land was sold to Philo Mills (picture below) and the money invested to provide an income to be used by the trustees. 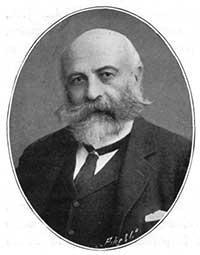 With an ever increasing population schooling in the village changed and evolved to the present day arrangement with a new Infant and Nursery school being built on land adjacent to Manor Park in 1967 which was named after James Peacock. 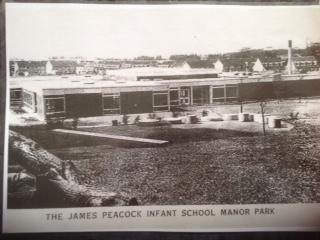 It is a single storey clasp building with adjoining Nursery accommodation. The school currently consists of ten teaching areas, all but three constructed around a central hall. Most teaching areas incorporate a ‘quiet area’ and ‘shared play’ space, with external access to a spacious playground and playing field. The outside area is particularly pleasant with a children’s garden, environmental area, and a trim trail. A new play equipment playground was built in 2018 after funds were raised by the Friends of James Peacock School.

The Nursery can accommodate 78 children. It has a large outdoor space which includes a sandpit area, a growing area for cultivating plants and vegetables, a playing field and a fixed large apparatus enclosure.

Following an extension completed in June 2007 the Nursery has become part of the main school building via a link corridor which also offers additional changing and toileting facilities as well as a classroom.

In June 2008 a number of additional features were added to our outdoor spaces. A new storage shed and Play Shed in the Nursery, a bike shed for children to store their scooters etc, an outdoor classroom (funding raised by the Friends of James Peacock School) and a shelter for parents and children to access.

January 2010 witnessed another new stage in the school's

development as two new classrooms were completed. These 'state of the art' teaching spaces include their own garden and play areas to enhance outdoor learning.

On the 1st February 2013 we opened a new classroom and completed an extension to the school hall. We utilised the space between two classrooms to achieve this.

Unfortunately not the ones with chocolate chips.

Some cookies are necessary in order to make this website function correctly. These are set by default and whilst you can block or delete them by changing your browser settings, some functionality such as being able to log in to the website will not work if you do this. The necessary cookies set on this website are as follows:

Cookies that are not necessary to make the website work, but which enable additional functionality, can also be set. By default these cookies are disabled, but you can choose to enable them below: